How to end the plot in my daydream effectively?

For the past two years I've been stuck in the same spot in my daydream--in a massive war. I don't even know which side should win, and don't get me started on how...

I basically have an evil monarchy/power hungry dictatorship on one side vying to restore the power of the former United States, using brutal tactics to get things done. This king is related to the American queen earlier (look at my drawings and other posts to catch up) he and his army steamrolled through the…

I have no negative feelings on my day dreaming. I suggest everybody with this habit to think positive about it. If you think negative about a behaviour it can eat you up. Making friends with a habit is the best way to overcome it. I control my dual state of mind by chanting meditation. I feel I am blessed as I am able to handle two states of mind together. All the best for fellow members

The Cause of My MDD

So... according to my English teacher said, i think i might have an inferiority complex. I know that every time i daydream, i always imagine myself to be much taller, beautiful, skinny, and popular than my real self. I think this is what caused my daydreaming in the first place. Whenever something doesn't go as planned, i imagine a different outcome. It makes me feel much happier until i realize it isn't true. I can distinguish between whats real and whats not but the fantasy world is just…

Hello. So ive been daydreaming for years now and i just found out recently that is was a "disorder". I had no idea there was a whole community of people with the same issue and im glad i now have people who can relate. If theres anyone who ever wants to talk, id be glad. I am very shy and antisocial if you met me in person. When i was younger i used to think i was crazy. I used to think i wasnt normal because it has alway been really hard for me to make friends. You guys have no idea how…

Hello there friends daydreamers! I've built up a quick questionnaire about your experience as having Maladaptive Daydreaming Disorder, the main purpose of this questionnaire is basically to gather statistics and better understand the disorder. You can answer the questionnaire and other people who doesn't suffer from MDD can fill it too, so we can actually establish comparisons! This questionnaire is totally anonymous, there is no way for us to know your identity.
Thanks a lot for your…

I need help. My friend who works with me has convinced me that he doesn't have all the answers and I need to talk to someone who can help me better than him. The thing is I live in a small isolated native community and there is no help for me here. I leave town 2-3 times a year. Does anyone know of any online resources I could take advantage of? Or is there anyone on here willing to talk to me to try to find what's really making me feel like my life is worthless? At this point in my life I'm…

The Content of my Extensive Daydreams (and how I got here) 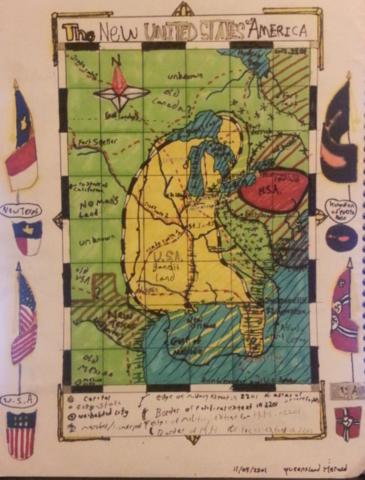 (one of the earliest drawings I did when I was 10)

So basically I've had the same daydream for the past ten years. The first thing I imagined was a magnificent flying warship in the skies. Ever since, I built around hat concept. By the time of 5th grade I had a nice plot going, with things being added left and right.…

Had this passage come up while having a daydream where holli and Aspen meet for the first time. Please see my old blogs from my profile page so you can understand a bit more. In this dream, holli has just run away from a tamer who had upset her. She had run quite a long way, and was just being sighted by Aspen's "clan" of feral humans. Aspen is actually domestic. Holli had a run-in with the clan several miles back, she did not know they were human. The leaders of the clan had sent aspen…

What my therapist says about MD

This summer I visited with a therapist several times. I struggle with depression in addition to MD.

In our first meeting, I was a bit surprised. Instead of talking about my MD, Janet asked me about my family. She asked me if there were any "villains" of my childhood. When I thought back to my childhood, there was just one person who could cause me delirious fear, though I never thought of him as a villain. I love my brother, infinitely. So why did he beat me,…

A creative person's life with MD.

This is the sort of post I've written a number of times - in my head and verbally to myself. It's the nature of this problem that what we can do in our imaginations is equal to what we can do in the real world. I wonder how many posts and articles have gone unwritten in reality because they were so beautifully crafted in the mind and left there lest they be tainted by public contact.

I found out about MD when I was looking for…

Hi everybody! I've been on this site a lot lately, but it's been a while since I made an actual blog post. This blog post is intended for me to belatedly express my gratitude.

I have a lot to be thankful for. We all do, actually. But seeing as you've probably heard lots of rants about about food and water and "roofs over our heads" from relatives over Thanksgiving--believe me, I did--and I'm assuming you probably don't want to hear another one (not that we shouldn't be grateful for… Continue