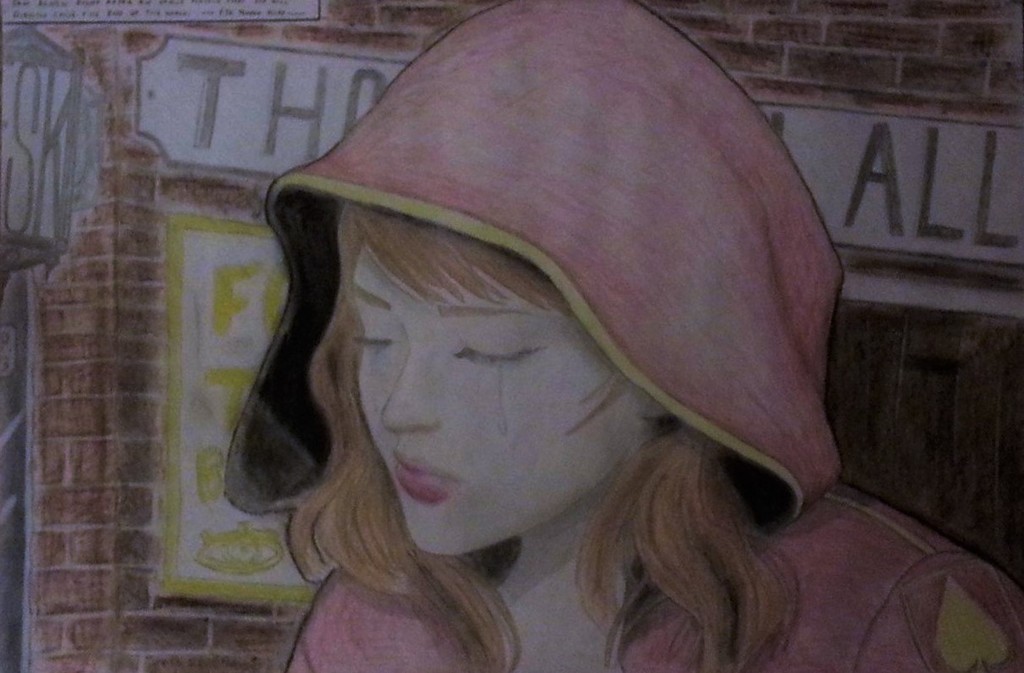 Characters in my daydream vary from being really flat to being almost human in their nature. Over the several thousand year long timeline of my day dream, I have accumulated many hundreds of characters, each one having an important role in the formation of the story. Here are some:

Commander Samantha "Sam" Agnew of the Free State of Kennedy Defense Forces pictured above when she was only 17 years old. Sam grew up in a relatively normal Kennedian house with many brothers and sisters and many more cousins. After completing school through the university at an accelerated pace, at just the age of 17 she and her friends went to a fortune teller to hear their fortunes as a joke. After the other girls got normal fortunes, as soon as the fortune teller touched Sam's hand, the blind woman screamed. The teller got really quiet and stated that "Samantha Agnew, you will single handedly destroy civilization and kill billions of innocent souls. You are the destroyer of worlds." And with that, Sam ran away from the fortune teller and denounced her as a fraud while crying. Which is pictured above. For the rest of her life she blocked out that night, and taught herself how to forget it until it was too late.

She was drafted into the military at 18 and was quickly promoted to the rank of captain even though the FSK had no real outside threat. She was sent to the Barrens, a land west of the FSK, and east of the Western Union overrun by "lawless gangs and tribes." She was tasked with the duty to keep them in line and track their populations, alliances, and trade. She and her small unit of 50 soldiers on horseback was on their routine patrol when a disheveled and panicked Western Union scout on horseback came across them on his way to warn the FSK's government about an invasion happening of the Western Union. She decided to lead her unit into the Western Union to assess the situation and help their allies counter attack the invasion.

Her ventures into the Western Union and to the city of Union, where the FSK embassy is located, is where she saw that she takes on the yoke of a resistance leader. After a long winter, she gathered over one million people to stage a massive push to oust the invaders while the FSK's regular army was still mobilizing. 7 long years of war finally lead to an opening where she and the rest of the FSK and the Western Union could attack the invading nation's capital of Kingsland. It is located above the Yellowstone Caldera, where they use geothermal power to light up the city. She lead a contingent of soldiers to attack one of these geothermal towers and shut it down, but she took it a step farther. She wanted to blow it up as to show the metaphorical fall of their power as to their literal fall as well.

After the charges were lit and she got out of there, Sam remembered the fortune teller, and sprinted back the tower to stop the charges, but it was too late. It exploded, causing a massive eruption of the super volcano that powered the station, instantly vaporizing her and a million other people within 200 miles of the site and releasing an ash cloud that plunged the earth into a new ice age that ended civilization. Her story is akin apocalyptic tragedies and Greek mythology, and is a major character prophesied in all major religions on the planet. 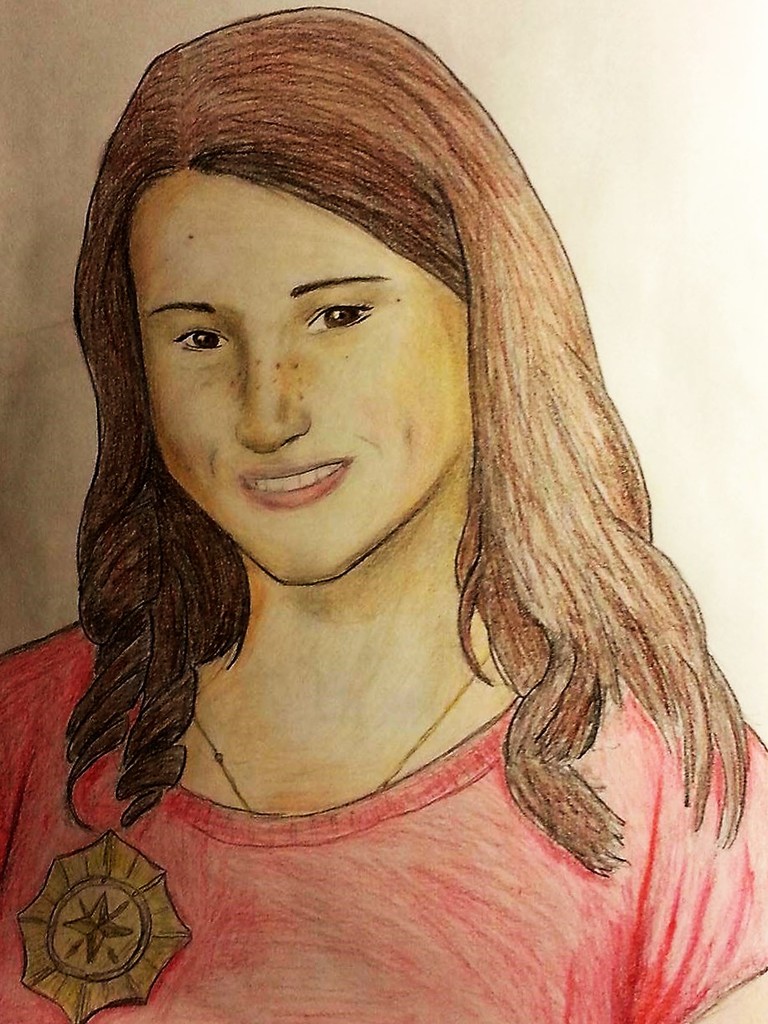 A more minor character is Mary Oaks, or "mother of Centralia." She was the head councilperson when the enemy invaded the Western Union and besieged the capital of Centralia. The city was placed under "quarantine" in which the gates were locked and nobody could go in or out, but the supply of food was dwindling. With spies on the outside saying that an FSK army was on their way to save them but were beaten back, Mary lead a movement to attack the weakened garrison of enemy troops around the city and take back the suburb of Keating, which has many food supplies. This whole event was known as and written down as the "Ballad of Centralia" a book which sold out all over the world. That is basically her contributions to my world so far. 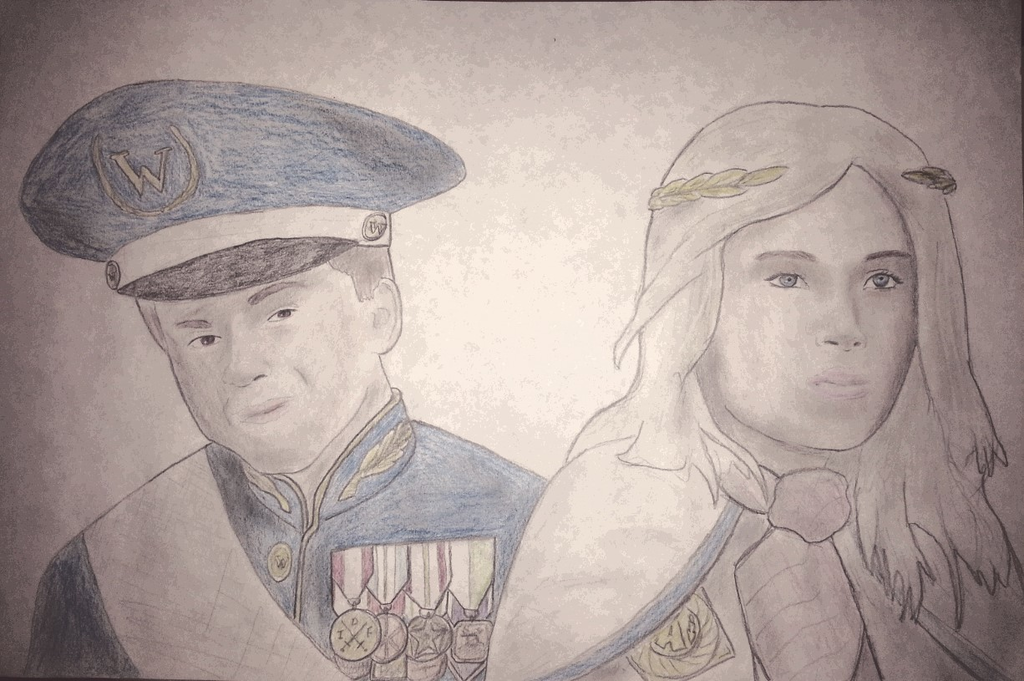 Finally there are these two people: Commandant Franklin Warren and Elector-General Danielle Luck of the Western Union. (I have detailed manuals showing what every medal is, their meaning, and uniform placement for the Western Union. As well as senatorial badges from each of the 26 provinces like the one Danielle is wearing on her senatorial robes and gold laurel wreaths)

These two people are in control of the remaining resistance forces left in the Western Union's province of Asteria during the Western Wars where an invading army has almost completely capitulated all government. Danielle Luck is the last remaining Elector, a class of senior senators, one from each of the Union's 26 provinces, chosen to elect the Arch-Steward of the republic. Along with that job they are given many more duties and privileges beyond a simple senatorship. She being the last one alive, uses her power to save the country through armed resistance to the invaders. She has taken the role of an Elector-General who works within the government and the army to get things done. But the thing here is, she IS the government in the country. Commandant Frank Warren on the other hand, is more on the front lines of the insurgency. He personally leads his legions into battle against the occupying forces with proper planning with Senator Luck. Eventually, the war will come to a point where Luck is also leading attacks on the front lines. These two people are responsible for the continuation of the Western Union through the enemy invasion; as well as the attack on the enemy's homeland where Sam Agnew ends the world.

Comment by Yolandi Wells on May 12, 2016 at 1:41am
Your drawings are really beautiful

@source I have been working on my world for at least ten years, but those drawings took me a day each, with the top one completed yesterday.

@Amity is dreaming Thank you so much! I do have a lot of free time now for me to do this lol.

Comment by Fallen Messenger on May 10, 2016 at 4:25am
I love how detailed our daydreams become, and you are SUCH a good artist. It amazes me the inspiration to our daydreams leads them to be an epic all on their own.

Comment by Camoran on May 10, 2016 at 2:20am
This stuff is amazing, both the plots and the drawings. How long have you been at it?