Sorry I've been gone so long.

I know I've been MIA for a while, but I'm trying to get back on more because I really do care about all of you and this site.  I've had some health issues that have left me no good for anything but whining and posting sarcastic comments on Facebook, not exactly helpful for here.

Here are the blah-blah details you can skip over about where I've been.

I've had GERD for many  years.  Meds did little to help, and diet did nothing.  I had surgery last year to fix it, and it worked for a while, but then the wrap slipped this year, so I had it redone on August 13th.  As with last time, I was put on a liquid diet for a while, but that proved to be problematic.  You see, there's another issue that has been getting worse and worse for years: I'll eat or drink anything and be burping and choking on foamy spit for 6-10 hours, which is HORRIBLE.  So, there I was, on a liquid diet, but unable to drink liquids because of the burping and choking.  I became extremely weak, dehydrated, and malnourished.  I had to go to the ER just to get some IV fluids.

Over the years I've spoken to every doc I've met (and there have been many) about this, but no one even took it seriously, let alone offered any solution.  Finally, on my way back from another appointment, I stopped in to see my surgeon and begged for help.  This time, he actually did something.  He suggested putting in a feeding tube.  I know that's extreme, but I was weak, miserable, and desperate.  I ended up in the hospital in a lot of pain for a few days after it was put in.  They said I had something called Refeeding Syndrome.  Basically, after the malnourishment, when they finally started feeding me again, my body just sucked up all the phosphorous, so I needed more.  They didn't want to let me go, but I argued and argued and argued until they finally relented.  Oh, and at one point my nurse accidentally overdosed me.  She gave me an antidote, but I woke up unable to hear because there was a loud ringing and some sort of loud noise like a fan or a motor in my ears.  That was a fun few hours.

I'd like to tell you it all instantly became fine and happy right then, but I can't.  I thought the feeding tube would be easy, but there was yet another inexplicable problem: I'd inject a tiny bit of formula into my tube, and I'd be instantly full.  A whole syringe would make me really full, and 4 syringes, which was about 1 shake, would make me feel like I were going to explode.  I was supposed to consume 5 shakes per day.  Not happening.  Scared about starving again, I saw my surgeon again.  He was actually angry that they even gave me the syringe in the first place.  He had ordered a pump.

Anyway, now I have a pump, which slowly feeds me over 10 hours in the evening while I relax and then sleep.  Now that I'm hydrated and getting some nourishment, I feel much better.

Now, you can see why I was away.  It's been a really tough 30 days, but I'm on the mend.  I even saw my regular doc (not my surgeon), yesterday, and on his way out, he smiled and said I looked really good.  It's amazing how much of a difference not starving will make. 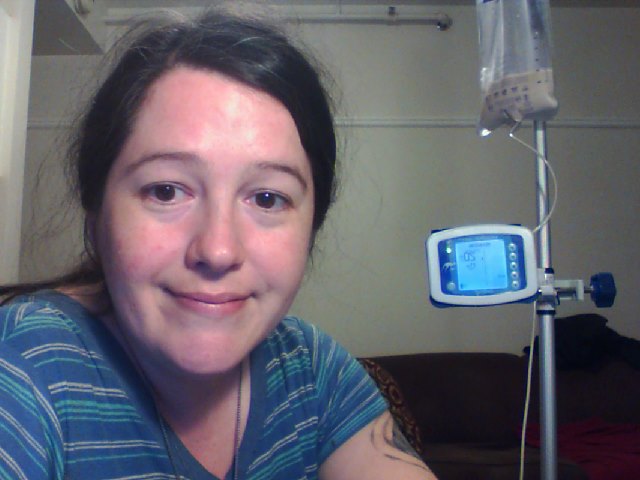 Aw, thanks.  I might be able to get my hair done again for cheap soon.  *fingers crossed*  I really loved having purple hair.  I'm doing okay, a bit weak at times, but okay.

I had no idea you'd be so sweet looking, plus no pink hair. I hope you get well soon Cordelia

im sorry to hear dat you have been going through such a tough time cordellia. i hope that you get well soon.

I'm sorry to hear what you have been going through. When I visited this site from time to time and didn't see anything of you, I was sure that you have serious health problems. I whish you all the best to your full recovery.

Oh, wow!  That sounds...horrible, to be honest.  Sorry you had to go through all that, but glad that you're dong better.

My main symptoms were painful burning and the taste of vomit in my mouth, but if you're having anything come back up, I'd see a doctor.  Reflux is the main symptom of GERD.  A doc could put you on meds, suggest dietary changes, etc.