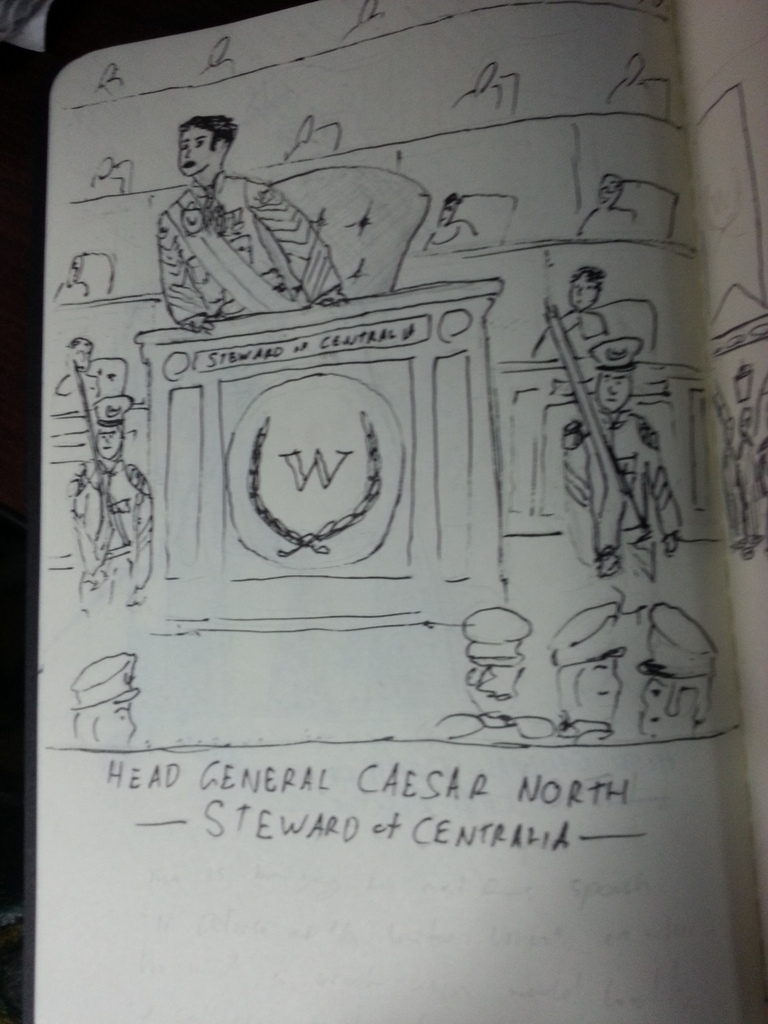 Since I left for college, my day dreaming has been confined to one single moleskine notebook. In it, almost exclusively stories and pictures of the Western Union. If you could divide my day dreams up into neat sections, the Western Union is the most recent. Here are some of the pictures for you. Above is the the Steward of Centralia, General Caesar North. The Western Union split into two unions, north and south due to growing sectionalism. Here General North is giving his famous speech on how a united Western Union is a strong one, he warned if they remained divided, they would be easily conquered. Which was exactly what happened. 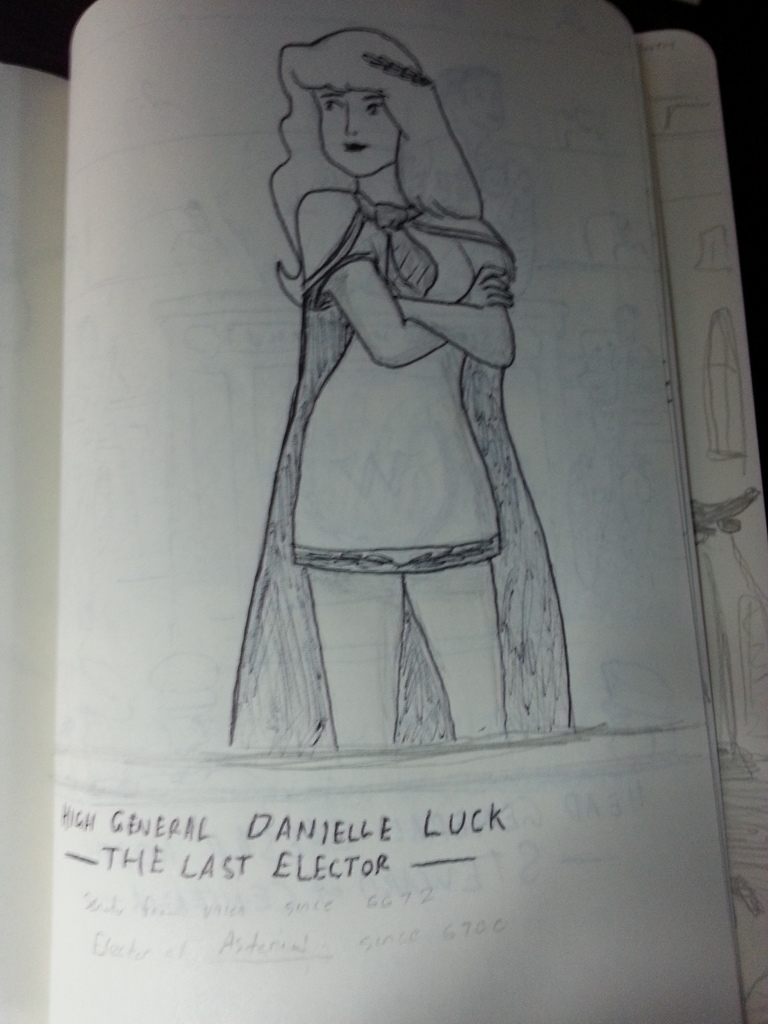 When coming up with the Western Union, I thought up an immense political system as well. The Senate is made up of senators from each province. Each province is award a number of senators according to it's population. The longest serving senator from each province is also that province's Elector. Electors select the Arch Steward, which is the equivalent to a president. Along with senatorial duties, electors also can serve as generals in the military.This particular Elector, Danielle Luck, the Elector of the Province of Asteria, is the last remaining elector after the senate was attacked in Bridgeport by the invaders. She rallies an army to repel to invaders. She is a very important character. 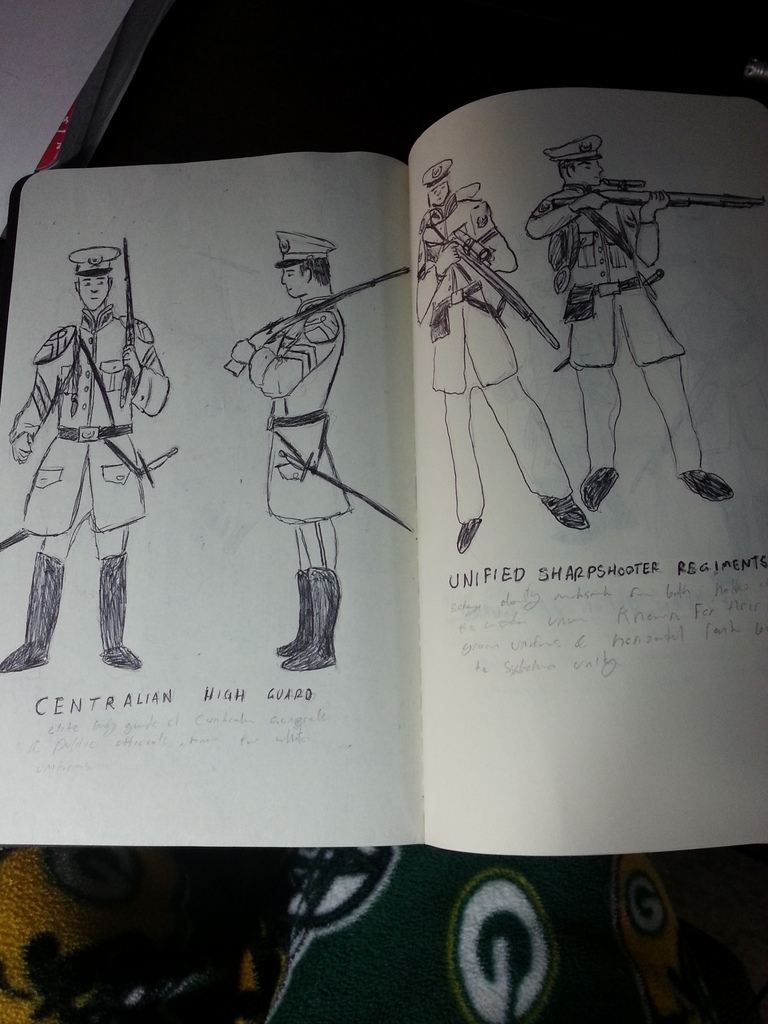 I drew out the the types of soldiers seen in the Western Union. Above are the High Guard and the Unified Sharpshooters. Who are guards in the senate and snipers on the field respectively. 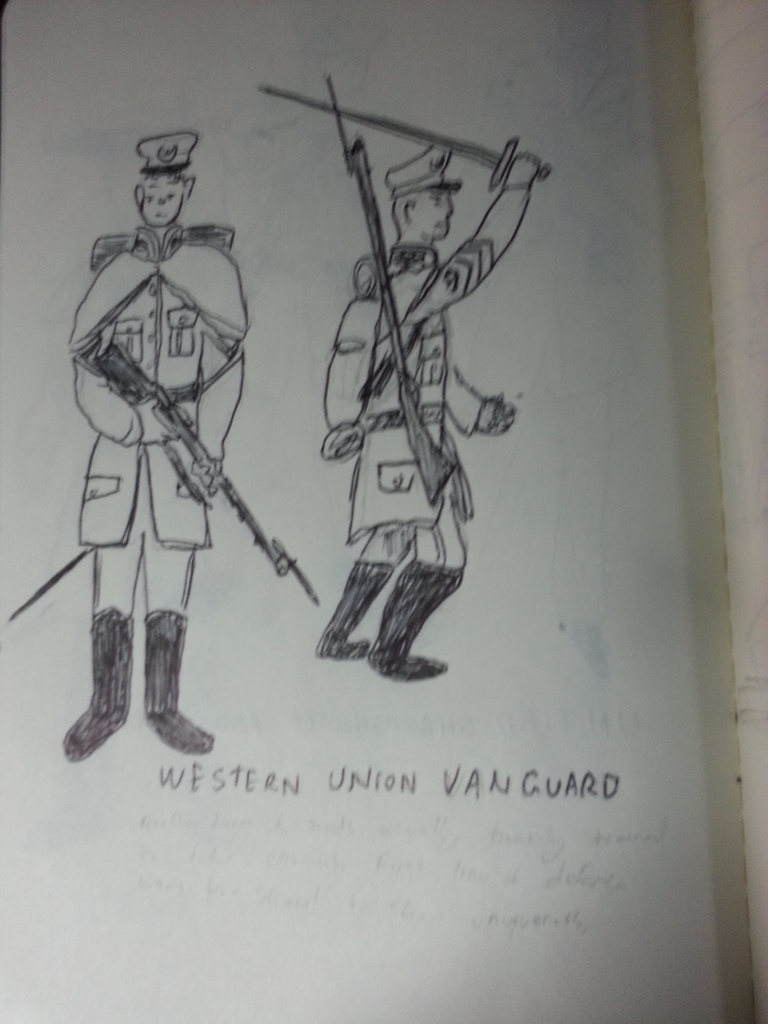 Here is the Vanguard, they are the best equipped troops and extremely well trained. They usually spearhead assaults in the war. 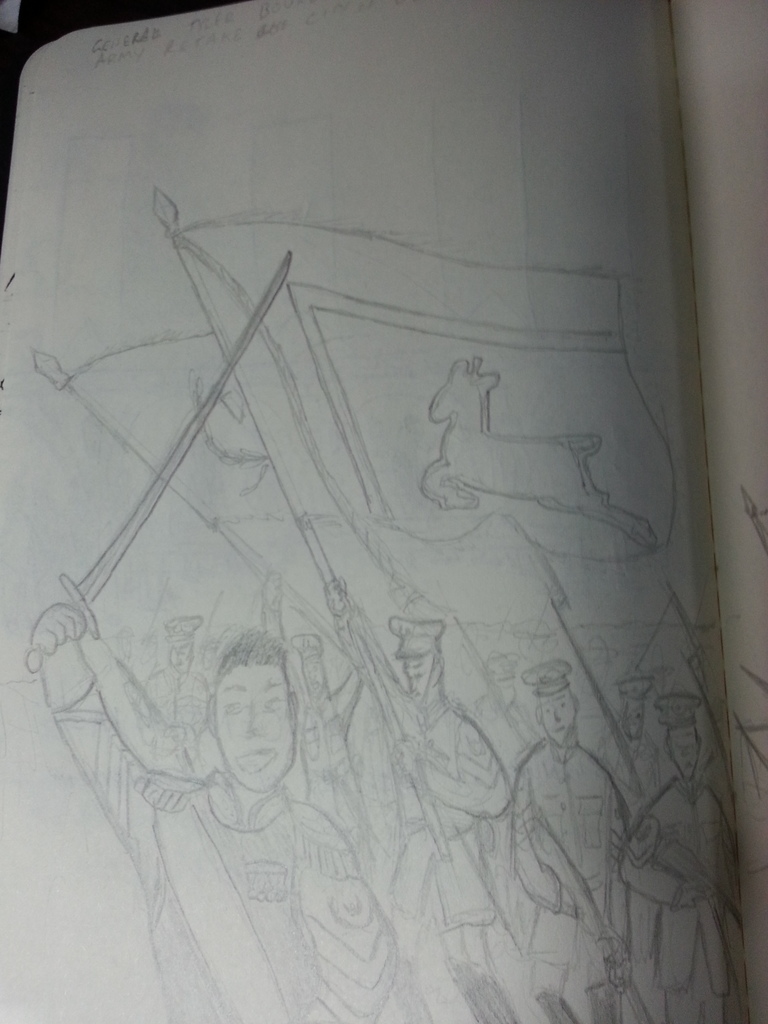 The picture above is General Tyler Bourdains and his army retaking the capitol of Troy, a province of the Western Union that was overtaken by the Uzahn armies. 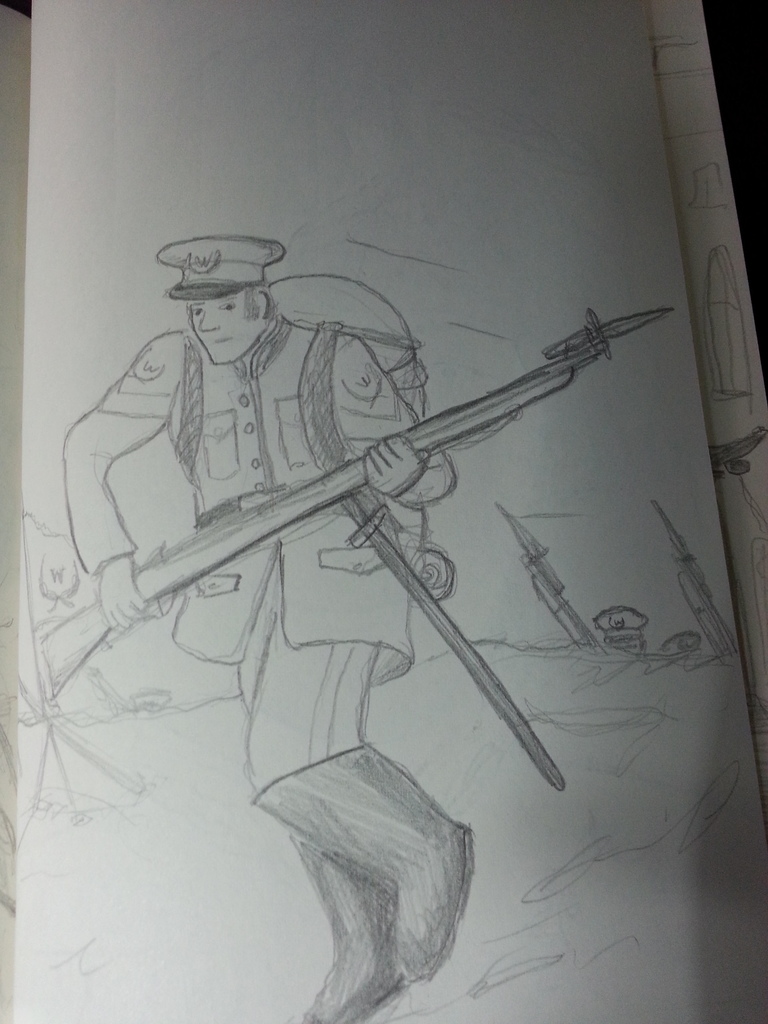 This is the Province of Tyndall's resistance movement recapturing the capitol of Irondale. This war in the Western Union is very extensive . The Union soldiers are not heavily trained because of the peaceful nature of their nation, but they have the advantage of having guns while the enemies have swords. The advantage can be seen here: the resistance just needed to dig trenches and keep the enemy army from coming too close. This was how they pushed the enemies from their country. 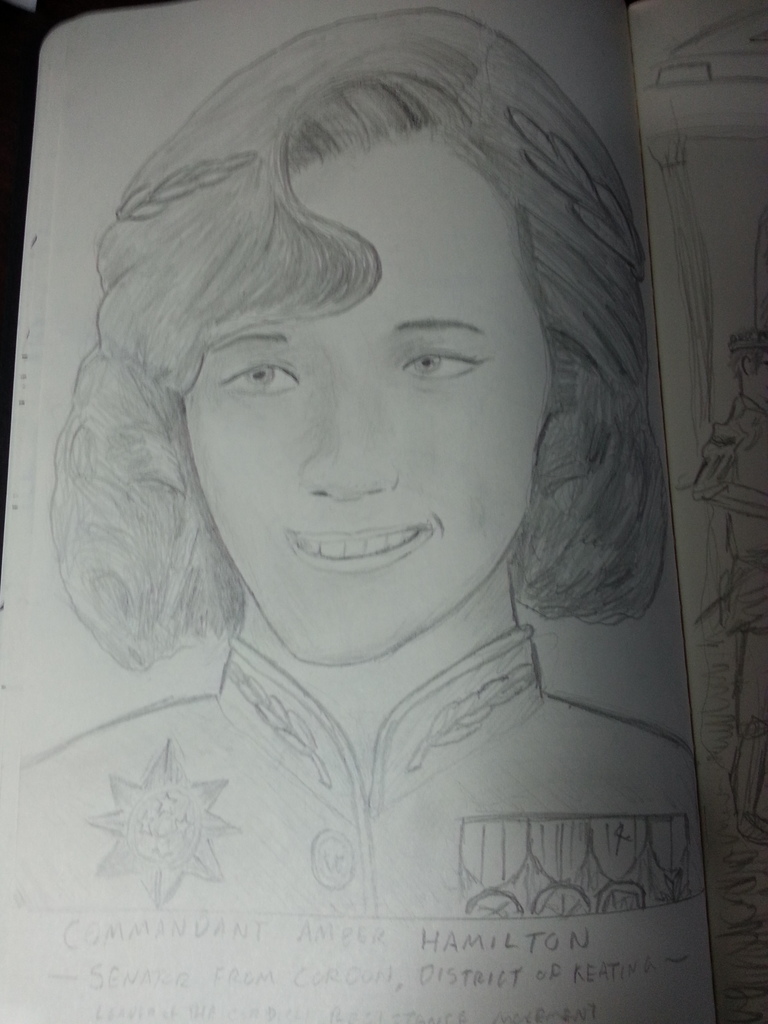 This is Commandant Amber Hamilton of the Cordish resistance movement on the province of Cordon. In the occupied territories, the only resistance was underground since the invaders destroyed most of the communication system and killed most of the Union leadership.

Overall, I've begun to hone in on the details of this story from start to finish. I can't wait to finish this story!

Thanks Bee! More will be on the way with detailed maps and flags as well xD My notebook is actually a cashiers version not a sketchbook so it's larger and more flimsy. My dreams used to be foggy like what you're describing because I didn't draw out the details or wrote them down. What do you do?

(Couldn't find a way to edit the first post again)

Your dds seems to be filled with very fine details. Weirdly enough, I never see that much in my own - things are always slightly "fogged". The world, the weather and the plot is pretty intricate, but the things like clothes and faces less so.

These are great - I need to know more! :-) The details you have are amazing. The moleskin paper seems to be smoother than I thought it would - mine has a slightly rougher texture. Probably just a different type. :-)