meeting one of your celebrity-based characters in real life

ok so, i dont know if i wrote it on here or on tumblr, but I said I wanted to go to toronto on the day of the toronto film festival because kristen stewart was going and i wanted to see her in real life because she looks like one of my characters (i think that sounds lame, but im not obsessed with twilight or anything, she just fits my character really well)

so my friend and i skip school to go to downtown toronto to celebrity stalk (lol we met john goodman ahaha) and we had no luck finding kristen, which sucked. we went to the tiff building and we were looking at the movie times and kristens movie was playing at 9. so we decide to see it, in hope to see her still. like, we were SO positive we were going to see her, it was funny.  so we got tickets and we waited in line and the ladies beside us said they;d hold our spot while we waited at the red carpet. everyone was 40 minutes late. BUT LOOK WHAT HAPPENED (excuse my face, ew) 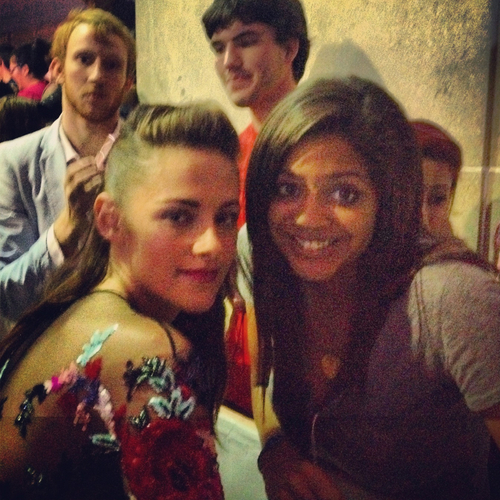 how boss is that?!?? she came over and she signed my friends ticket and she signed my backpack. i had no idea what to say ....so i said "wow your like, really pretty" (thats embarrassing) and said "wow your like, really pretty too"
skfjaskld kristen stewart
and my friend said "do you still smoke weed?" and she said "fuckin right"
and she hugged us and she said "i fucking smell really bad" and i laughed nervously and she continued signing peoples things and...yeah
i wasnt really thinking about my character at all, though. i was too star struck at the moment. but i guess i talked to and hugged one of my characters in real life? That was pretty cool. and we saw the premiere of movie and it was cool.
so yeah. that was my thursday.

wow! So jealous right now! She sounds so cool.

And you are pretty :)