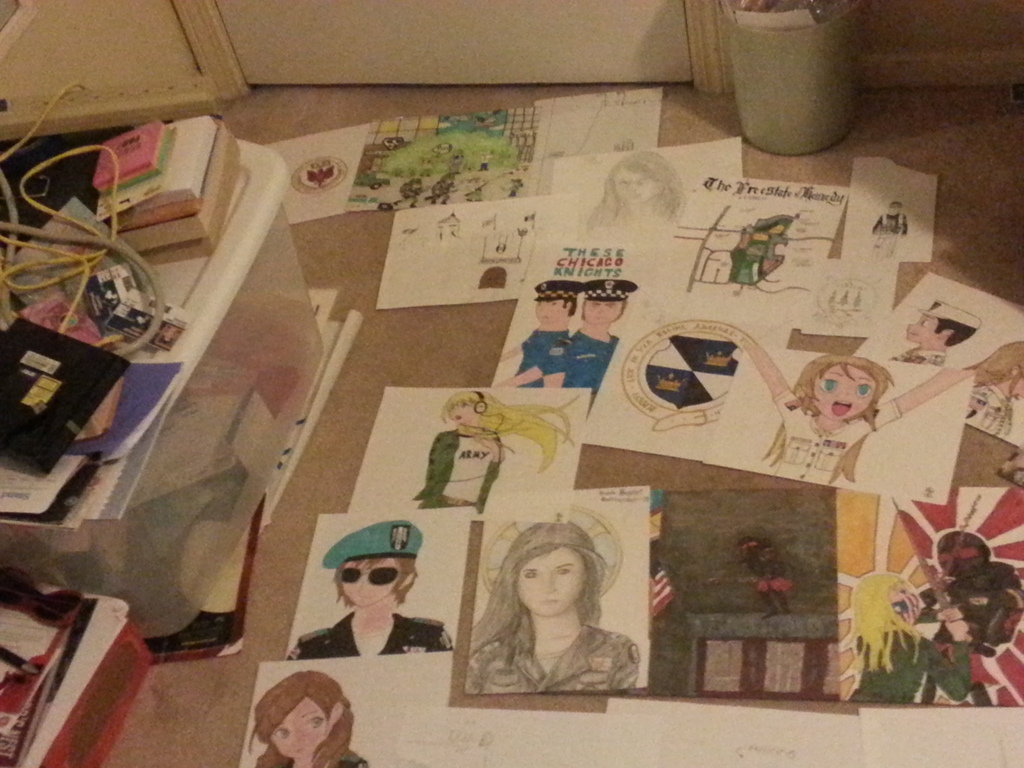 I want to preface this blog post with the fact that these pictures seen here are in no way my whole collection of DD art: there are hundreds more drawings in sketchbooks, hung on the wall, tucked away in many places, and given away.

I laid them all out in a general sense of a singular timeline, but since I ran out of space I had to squeeze it all into a massive collage.

Starting at the very beginning is the creation of the school that would become the FSK's Bedson Grove, next is the Green Plague, the settlement of Queensland, and the founding of the Hoffman Empire. I know a lot of people will be confused by this, but I have posted much more in depth for other stories in here.

It's hard to believe I can visualize my DD so well and so often: I am overwhelmed by all the drawings. Each one with a different story; they are all connected and provide a dense background for my fantasy world. In this display you can see my art progress over the years, with pieces as old as when I first started out, all the way to my more complex drawings of today.

Not only do I draw people, I draw buildings, maps, actions scenes, and even seals and flags to add depth to my fantasy world. Many maps you'll see are the progression of Kennedy to  a full fledged nation. You can also see Parker and Amanda Prophet's story progress in the first and second frame. 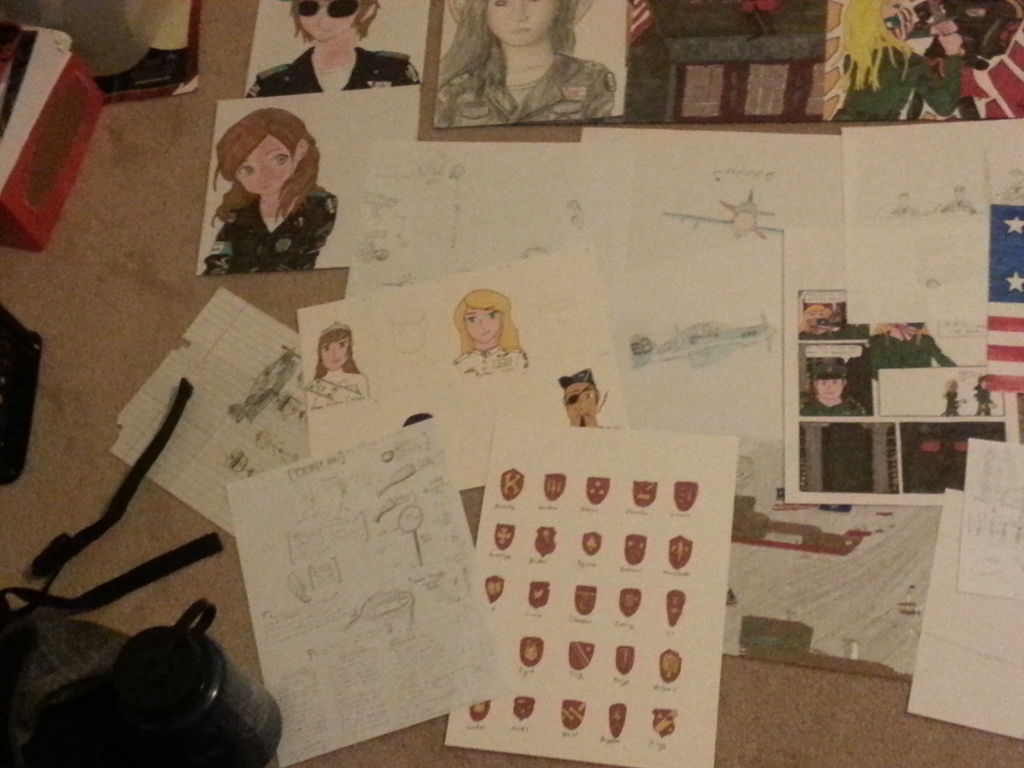 Sometimes I cover aspects of my world and never return to them; I just accept it as fact for future reference. In the above frame you can see many pencil drawings of airplanes and flying ships. The very first subject that started my whole daydream, but after I got bored with them I never came back to them, instead I developed stories elsewhere. One such story is the biker gang of the Guardian Angels, who make Queensland their home. (anyone wearing a black leather jacket is part of the organization). They provided a framework to work my Parker-Prophet epic off of. (Which can be read about in my other blogs). 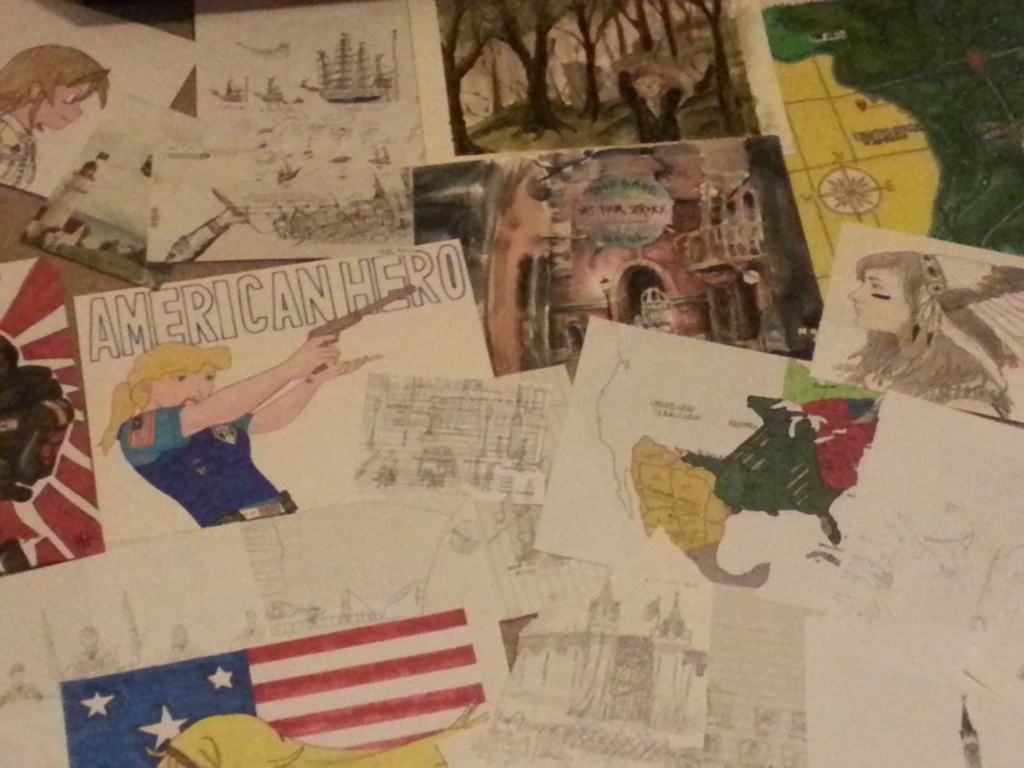 Perhaps the most drawn character I have is Parker (the girl who's the American Hero, and pictured in front of the flag), often I wonder why she is the most prevalent character in my whole universe even though she isn't the most important. I now realize that she's drawn so much because her story is one of the most pivotal and fascinating in my universe. A girl who's born in Canada before the green plague, but get amnesia when attacked by Hoffman forces, she becomes number XXI in the Hoffman army register, and forced into serving the dictator. She gets her break on the frontlines when she defects to the American side and becomes the world's deadliest killer and spy. (If you want to hear more, look at my other posts). Also seen in the frame above are extremely detailed pictures of Kennedy, painting a very accurate picture of the country. 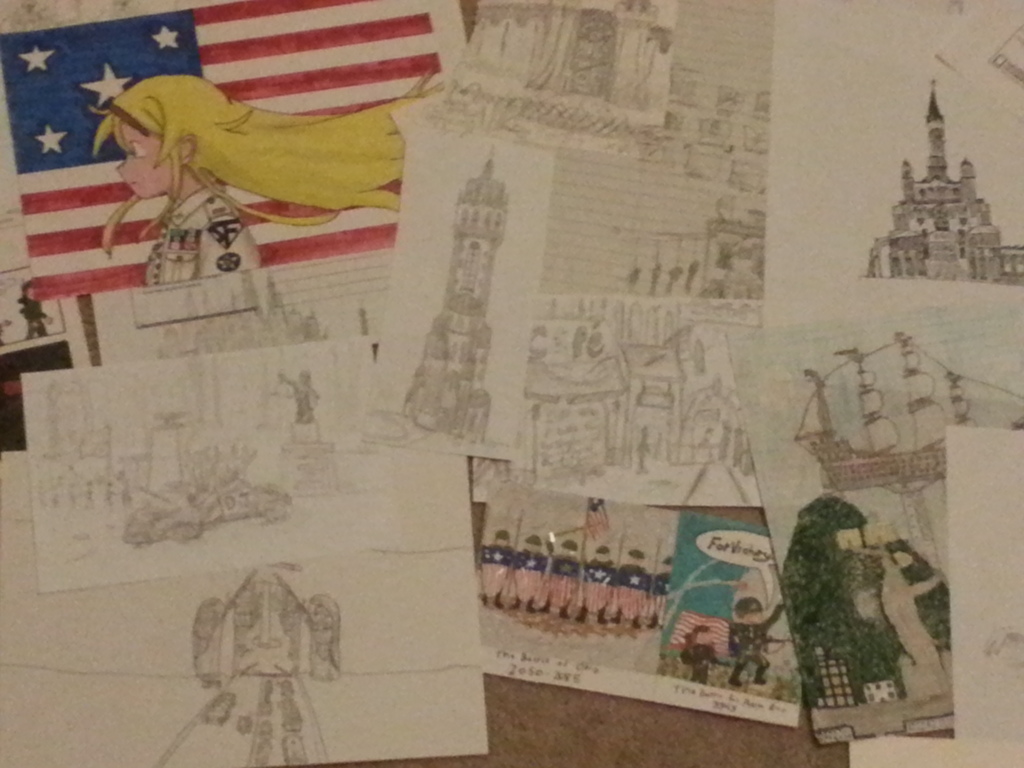 I also drew many hundreds of famous building and places for my characters to travel  to and fight over. In the frame above one can see the destruction of Northland by gangs, one of the more sad stories of my universe. Keep in mind that pictures near each other happened close together: at the same time that Northland was going to ruins, Colonel Willows was expanding the American Empire around the globe. Everything is put into perspective. 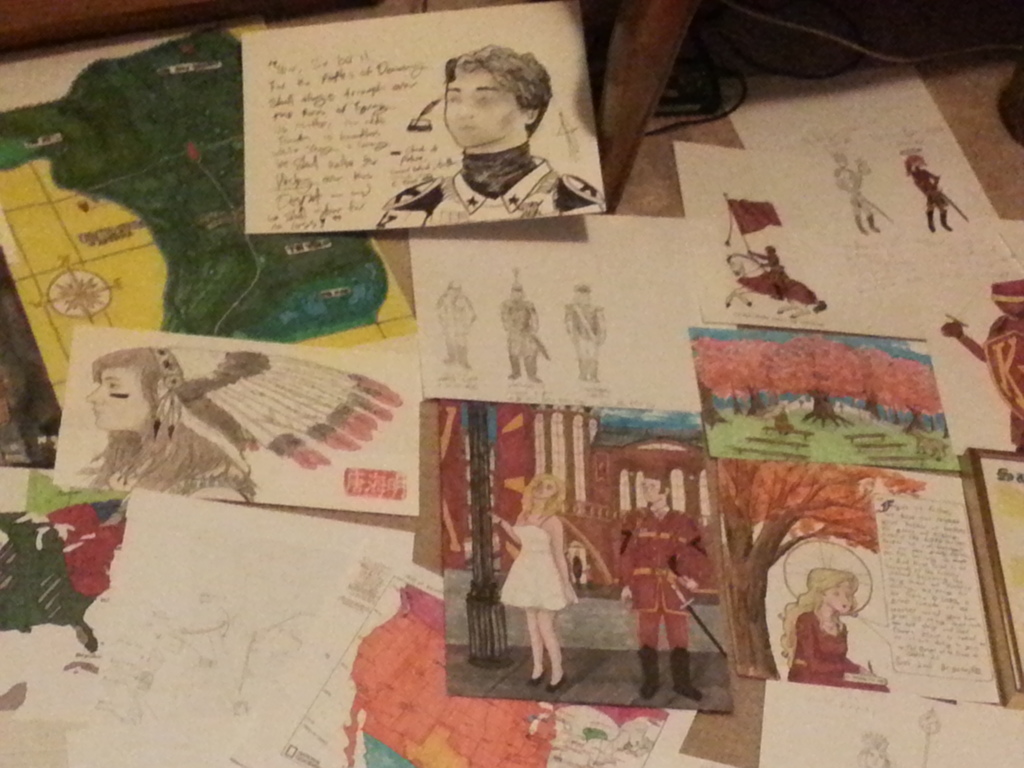 The later I go on in time, the more I concentrate on Kennedy: in the frame above is a drawing of the streets of the city next to the sanctuary of the forest. Above the Queens, is a complete map of the surrounding forest and burial circles for Kennedy. It seems that Kennedy has most of my focus. Mainly because it is small enough to chart out entirely and vividly. 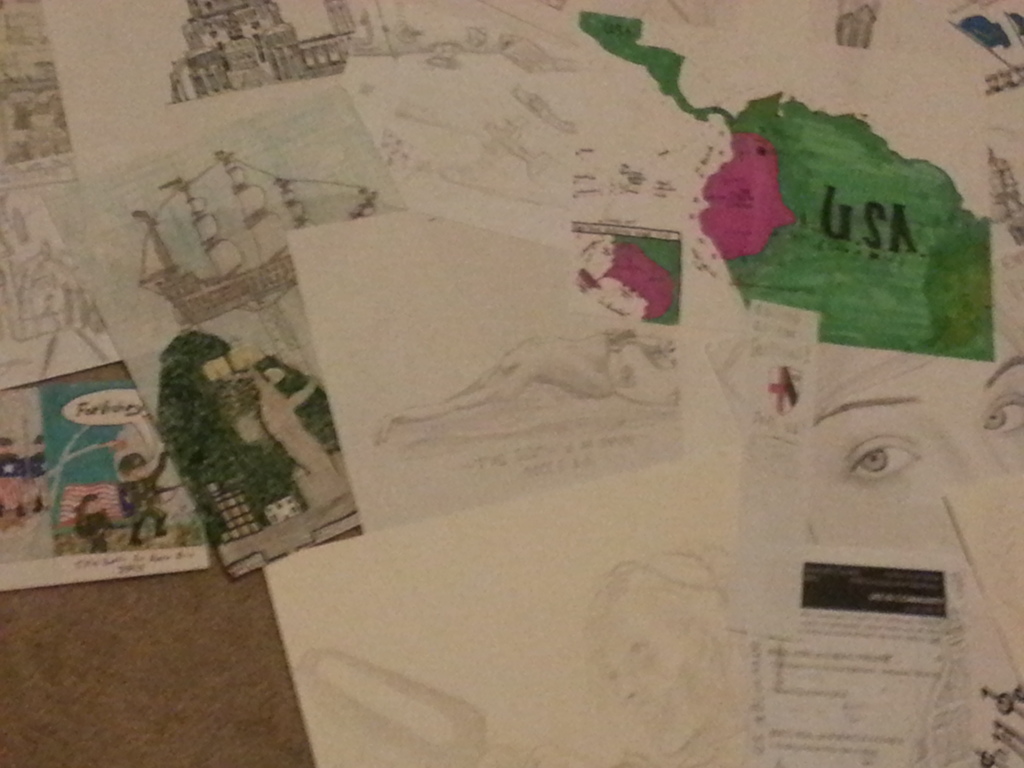 In the frame above you can see the fall of the Hoffman Empire, which lead to the South Empire and its powerful Empress Vivian Grey (the big eyes). Much of the latter history was thought out and drawn much more recently than the other stuff, so I'm not done mapping everything out and finishing the story lines. 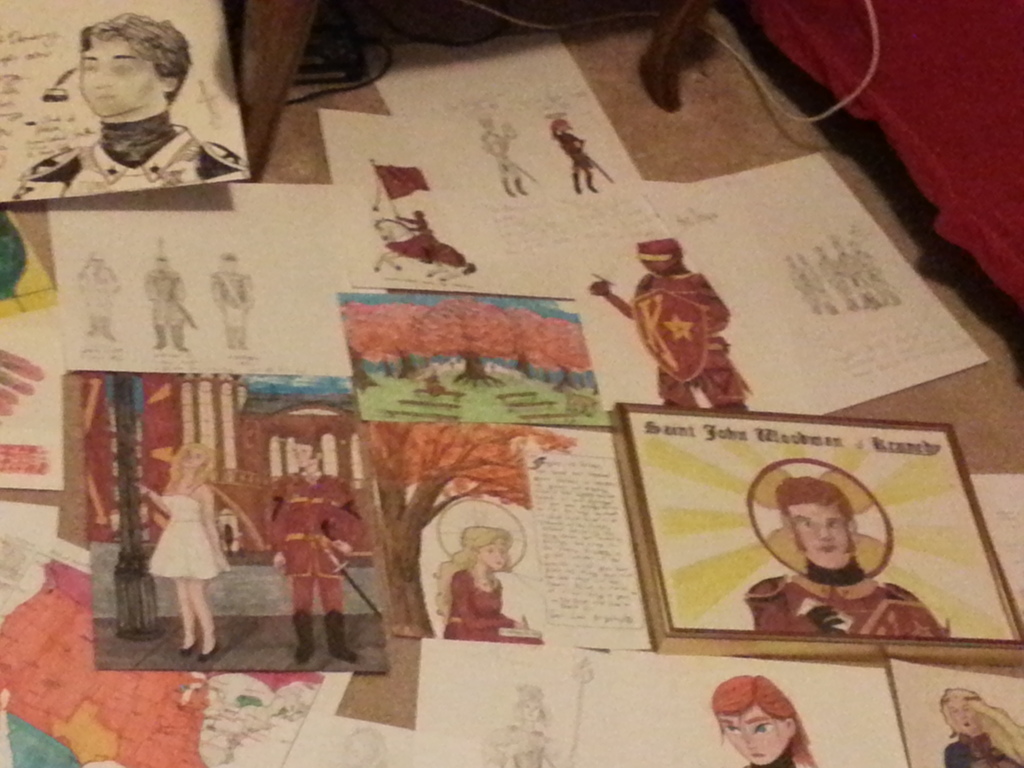 With the arrival of more Maroon and Gold, one can see the rise of Kennedy in the age after the fall of America.  These are latter times indeed, where the timeline jumps around 4000 years ahead to the year circa 7000. I do have an idea of what comes in between those two times, but I haven't had the time or will to draw it out. 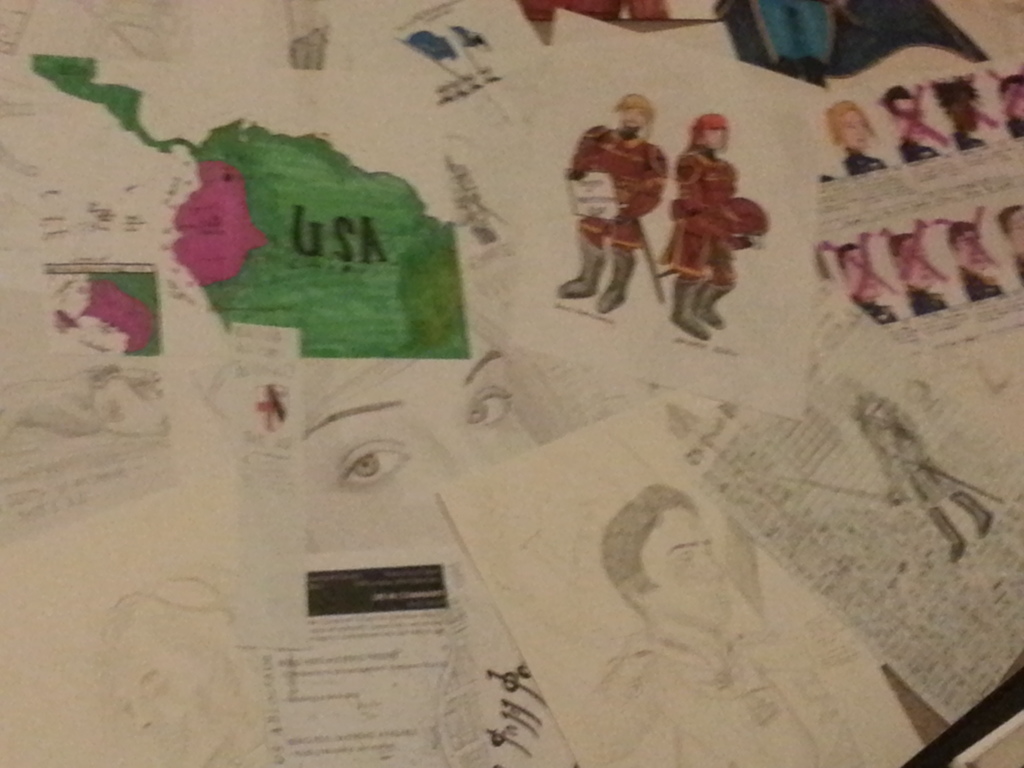 These drawings start to reflect the end times of my universe: from dictatorships to war between free and enslaved. The Tri-Star Alliance between the FSK, the Western Union, and Asteriskia, against the tyranny of King Jacob's Uzah. 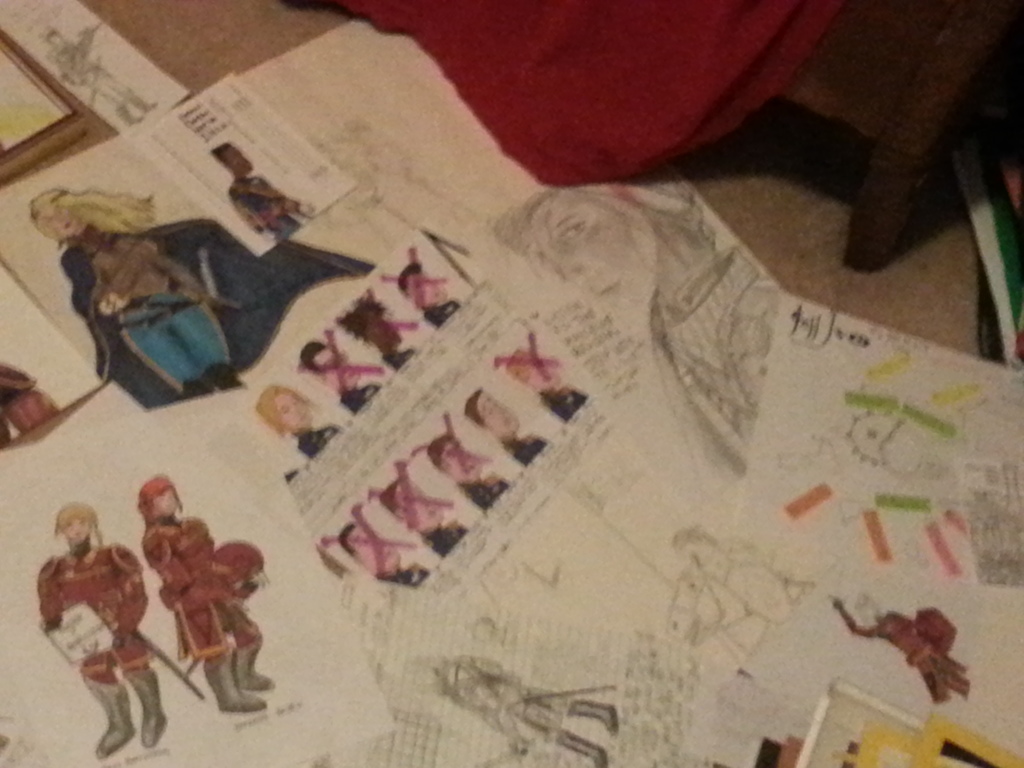 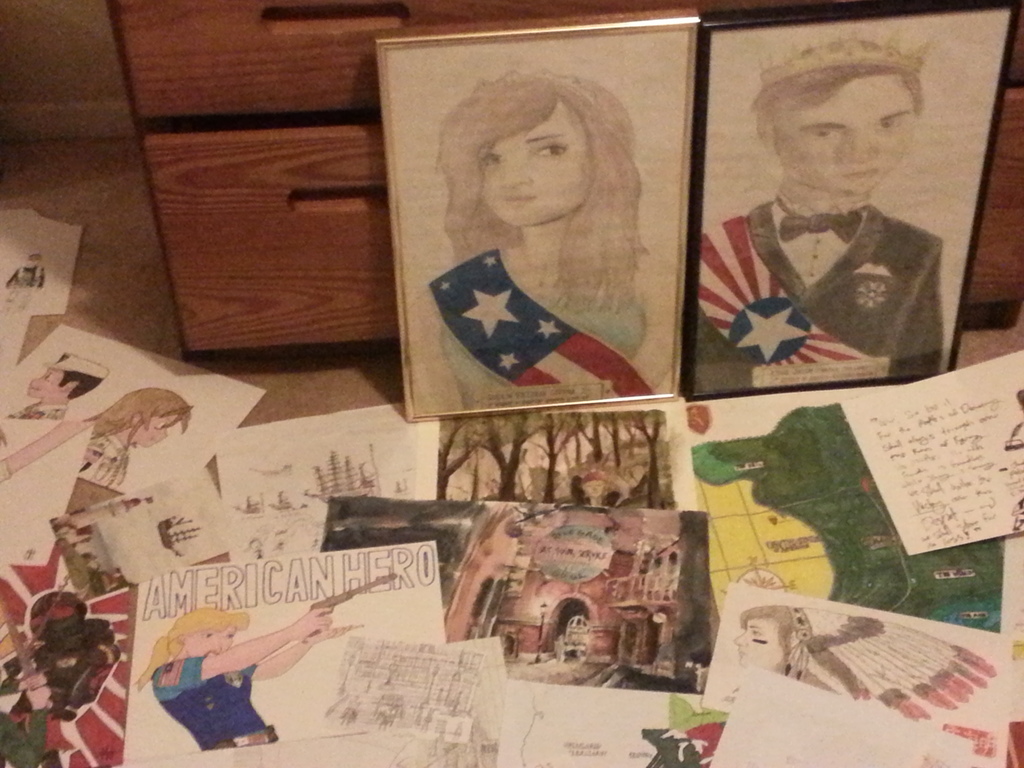 Among all of the mess, I keep framed pictures of the Corona family, one good and one bad. These are the driving characters behind conflict in my world.

I understand that I grazed over many pictures here, if you want to know more, you can always ask me, or look at my other blog post detailing some of it! I'm trying so hard to get all of this documented before I leave for college next week.

Feel free to comment below on what you feel and ask any questions you want!