MD as a coping strategy against fear

I always thought of my problem with MD as some kind of addiction but after a while when I began reflecting about it, I noticed it was always extremely severe during times when I had more or less conscious fears like to fail or not being good enough, being rejected or whatever. So MD was also a  way fo me to deal with these fears.

That's why I was very intrigued when I saw  a small lecture by the German neuroscientist Gerald Hüther about addictions that put these "observations" together. IMO it also explains MD or at least it helped me to understand my behaviour better.

I know my English is not the best in the world but here's my translation of his lecture:

According do him addictions are initially coping strategies.

There are coping strategies like gathering knowledge, wielding power (esp. when your fear is to be helpless), doing drugs etc 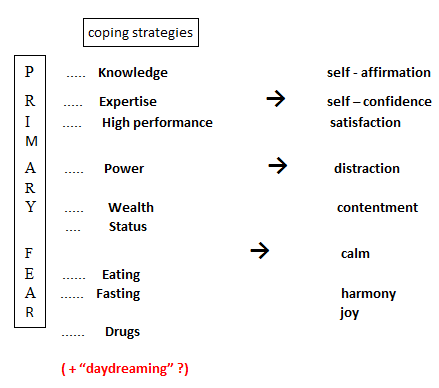 People “pick” one (or more) of these strategies to cope with their fears. As a result your brain releases dopamin and you feel good.

The more often the strategy is used the more dopamine is released and the more this behavioral pattern gets established. Your brain forms new connections so that after a while it's like a small trail is formed in your brain  You still have a certain control over your behaviour.

Then you've (almost or completely) lost control over your behaviour. Now you're an addict, which creates new fears and other negative feelings. 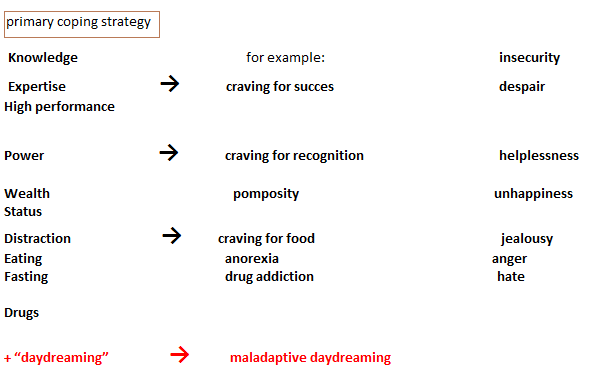 You can only end your addiction  when you manage to get rid of your primary fear.

Do you think that's understandable and plausible?

Permalink Reply by Paracosm on March 28, 2013 at 6:49pm
It sounds plausible to me. I used to think my daydreaming was as simple as a self-control problem that I had developed when I was really young, and that all I needed to do was gain control of my imagination. I changed my mind when I realized that while my fantasy world has changed a lot over time, the same themes have always been there. These themes correlate exactly with the things that I've always wanted or needed and yet lacked in reality. So, for me, daydreaming is a way of gaining control over the things I'm not able to control in my real life and to mentally create the things I need to prevent me from going completely insane, lol. Daydreaming has been a source of emotional support and it has helped to get me through the hardest of times. Unfortunately, it only acts to numb the pain. It doesn't resolve anything. And that's fine, if the problem is only temporary, but if you become comfortable with a coping mechanism, acknowledging the problem becomes even more difficult because the coping mechanism only adds to it. At least this is how it is for me.

This makes since and I have slowly come to that realization, but I never saw a chart like this and that helps.

Your English is just fine. Also, I think that could be true for some people, those who used MD as a coping strategy, and maybe some who started a little later in life. Personally, for me, it's more of a way of processing emotion and, I think, making sense of what's happened in the day (like, understanding why people did/said things they did, etc) I just need to find good times to do this, I think.

But this is very good (and better than some similar explanations I've seen, thanks to the diagrams)